Woke up in the morning to find the A/C trunking had some serious condensation dripping off the bottom. Didn’t take a picture as I immediately wiped it off LOL.

Pried off the cover (had to use quite a fair bit of force) and the problem became apparent. A section of the insulation had collapsed (probably due to compression from squeezing it inside the trunking), and water was forming due to the temperature difference. Here where humidity is high, it doesn’t take a too big temp diff to make water form. I think a 10ish deg C diff will result in problems. Anyways here’s a section of the tubular insulation I removed. 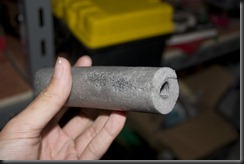 And a cross section view, you can see the left side is noticeably thinner. I’d have gone with super thick insulation if I could, but then will end up with a shoe-box sized trunking LOL. Aesthetics vs function..mmmm. 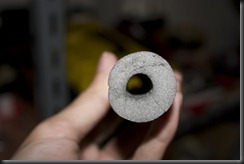 Here you can see some moisture already re-condensing on the cold copper tube. The green stuff is likely some corrosion due to the increased moisture content. Wiped that crap off and then bought out a spare section of insulation. 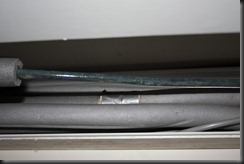 Here it is, some spare, I had to slit it to get it to go in without disconnecting the tubes. Hopefully the RTV I’m applying later will make it close properly. This stuff is probably better then the stuff that’s fitted in. Popular brand names include Armaflex and Insulflex. Don’t buy into that “Grade wadever” crap that installers will try and baffle you with, the grade of the material has nothing to do with how well it insulated, it’s gotta do with how lamely it (retards) burns. Unless you’re running it over your stove I don’t think it’d really matter. (Unless your country/place has strict laws in place that require you to meet.) 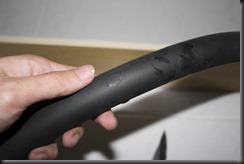 And here the splice is made, plenty of tape to keep moisture laden air out of the system. 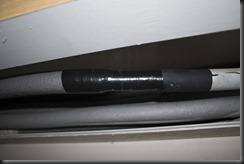 Next was to close up the trunking and then test it out. It’s been a week, and I’m glad that the fix seems to be holding out. Sure beats trying to re-insulate the entire length of the tube.