Tearing up and Fixing your Hailea chiller. (HC-150)

This is from awhile back, putting it up if someone ever needs it.

*Disclaimer, be careful working around mains voltages. Water and 220VAC do not mix well together. Although unit is pretty well sealed with plastic shrink tubing and RTV on splices, its possible water may enter connections and electrocute you if you’re not careful. You’ve been warned.*

Had a unit in that was thermal cycling, compressor and condenser coil were getting real hot, compressor kept resetting with a constant burp burp burp sound (according to him, I never did run the unit enough till it reached that state, leaving the compressor to cycle like this is a sure way to end its life prematurely.)

Bought unit home, together with a loaner pump to test the system out and hopefully fix it (still don’t quite know what’s wrong yet, for all I know, it might be the compressor. Was lucky this time though. 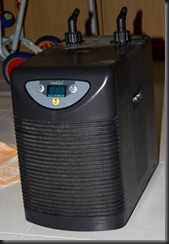 The victim. I think this has a 1/10HP compressor. 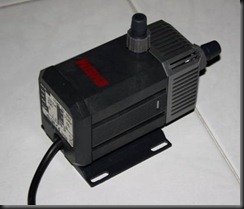 The pump, pretty solid unit, I just submerged it and fed the output into the chiller. 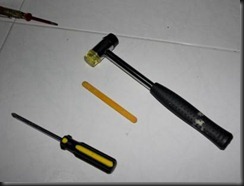 Tools you need, yes that’s an ice-cream stick. You need something that’ll not damage the plastic later, a plastic or wooden dowel will work as well. The test pen on top left is optional. You can tell a lot by feel and sound. A small rubber mallet is way better than whacking with a hammer.

To remove the outer plastic shell. First undo the screws near the base around, there should be 7, 3 on either side and one on the back.

Next you need to remove the fittings on top. As well as take out the lock ‘nut’. This is accomplished using the Popsicle stick and mallet as shown here. 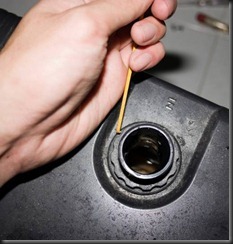 Gently ease the bugger out, the back end of a plier would probably work also, don’t use the pliers’ jaws as it’ll damage the plastic.

Do the other side and then slide the cover off gently, don’t yank too hard as the control panel is still connected.

To disconnect panel, press on tabs and pull apart firmly, grasp by the connectors and not the wires. Pulling out the wires will not be fun.

Removing the panel is easy, just push on the 2 tabs on each side of the panel and slide the whole assembly out. Like so. 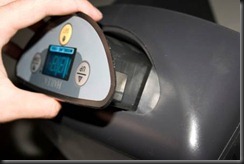 A close-up of the tabs here. To get a better idea. 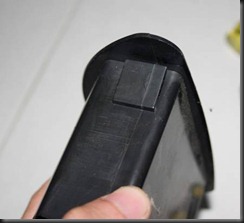 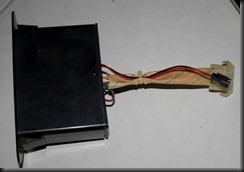 Connect the panel back temporary for the testing phase. Setup the test bed now; I used a clothes peg to hold the tubing. You need to provide some flowing water, without water the evaporator coil would probably freeze up pretty quickly.

If the unit was ever turned over (upside down) at any point during the disassembly phase, it’s a good idea to let it sit (right side up of course) for at least 30mins to let the refrigerant settle down. 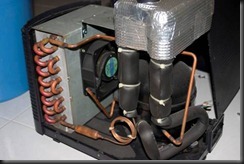 It uses a fixed orifice system, pretty normal for a small setup like this, and yes it does have a $$$ non-copper evaporator (titanium probably). 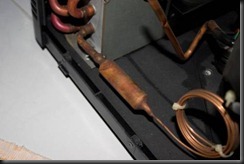 The compressor uses R134A refrigerant, no valves for filling/manifold gauge attachment. No idea how much refrigerant is supposed to be in there (usually fridges or such will have a refrigerant weight stick or label somewhere, sight glasses also don’t work to quantify the charge level on fixed orifice systems, some guesstimation might be in order if you ever need to fill yours). 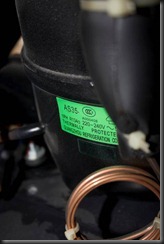 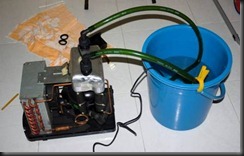 Turn the power on and let it run, set the required temperature to something low, say 18deg, after a bit, a relay in the control panel should click and the compressor will hum to life.

This is where it gets important. Look carefully at the fan; it should start spinning the second the compressor comes on. If it doesn’t its broken. You can later confirm by disconnecting the fan and measuring the resistance across the 2 wires. If it’s infinity (open, like on mine), the fan’s broken.

If you blow a fuse it’s likely the compressor (or it’s startup PTC) or fan is shorted, disconnect the fan temporarily and let it run, 2-3mins of running and it doesn’t blow the fuse again should mean the fan is borked (can re-confirm with a multimeter), if it still does, try swapping in a known good PTC, else the compressor is the culprit. No real way to fix it unless the compressor is replaced, probably non-economical. 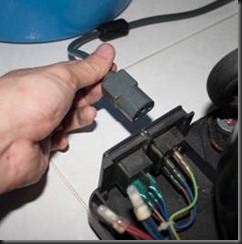 Remember to unplug the power before working on the inside (removing fan etc.)

To remove the fan, undo the 4 screws holding the fan. You might need to use a 6mm spanner to break it loose. 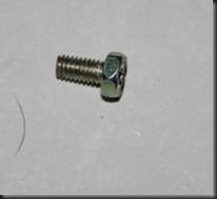 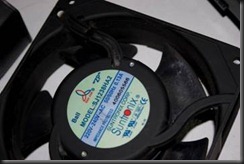 Locate a close enough replacement (current required, blade design and dimensions). Splice the wires in, heat-shrink the wires for water-proofing, cleanup the stuff, put it all back together and it should run good again.