Had an Acer from my aunt come in for repair the other day, it had bleeding graphics issues and couldn’t boot into windows (or at least you couldn’t see it go in anyways). Here’s what it looks like just after power up. 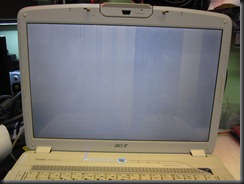 I disassembled the whole laptop down so I could get the graphics card out (it was in some sorta MXM slot in card). 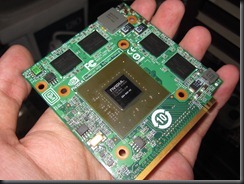 Card is an 8600M, a lot of these are notorious for failing during service (due to bad underfill material). Didn’t have anything else to lose, so I just fluxed the BGA and then put it on the rework station. 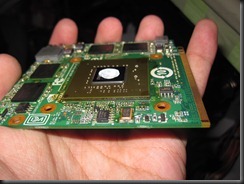 Usually I clean the residue flux by using a Qtip and then some IPA. If the board is small enough (like in this case) I chuck it into an ultrasonic cleaner to get everything out, if the board’s too big I just leave as is (and try to use as little flux as possible), or if it’s real bad I try and squirt some solvent in between the BGA and the PCB.

Glad to say that after just reflowing the solder joints under the GPU, the gfx card started working normally, how long will it last I wouldn’t know, will post another update if it ever dies again. Till then… xD