This project started with me finding my old Gameboy pocket. It was still working, but the LCD had developed a dark spot in the middle. 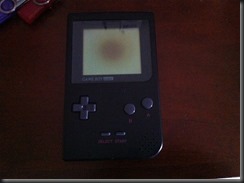 Kind of like this one, the picture is not of my gameboy. Booting up games with it results in this. 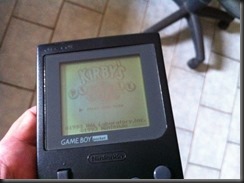 Looking around for solutions to this issue, it seems like

1. Gameboy pocket replacement LCDs are hard to come by.

2. You could do some really cool stuff now with backlights and biverting (more on that in a moment).

I went ahead and ordered a backlight module off nonfinite electronics (which should come with a spare polarizer).

My thinking was that there was something wrong with the reflective layer or polarizer and that since I would be getting rid of those layers during the backlight mod, all should be good.

I pulled the LCD module out of my gameboy pocket and set to work. Look at the discoloration on the rear polarizer + reflective layer.

Putting in the backlight module, I realized that the issue was not just contained to the rear layers, the front polarizer on the LCD had also suffered damage (I think the glue has breakon down in the middle spot).

I tried removing the front polarizer, which was fairly difficult. Not only did the front polarizer pull off, another semi-shiny layer of the LCD also peeled in some places as well, figuring I had nothing to loose, I removed everything and stuck on the replacement polarizer.

Eventually after a few hours of mucking around, the LCD did work, somewhat, in the process of doing all of these and trying to remove all residues, I had to use acetone to clean up the LCD, I suspect some of that seeped under the LCD connectors and compromised the connection. I was now missing some horizontal lines.

Next I tried the age old tested method of using a soldering iron to try and re-bond the connections, the Gameboy pocket has a slightly different kind of ribbon cable though. 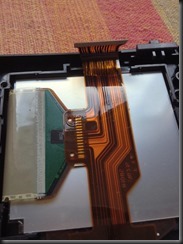 Even with a fast swiping motion, the whiteish ribbon cable was over-melting and that was the end of my experiment of fixing that particular LCD.

Part 2 will follow after I find another Gameboy pocket and pull some parts off it to fix my existing console.