Rental apartment I’m at has a garage door opener that’s been working well up till recently, it would open with the remote but not close.

I’ve been living with that (and jumping across the sensors below that detect when something is in the way) until yesterday it wouldn’t reliably open unless I was up against the garage door (boy was I worried). I was also worried about interference from LED lightbulbs that could potentially be affecting it’s range, turning off all lights resulted in no change so it wasn’t that.

I tried re-pairing (reprogamming) the remotes to my garage door opener (I have 2) and unless I put the remotes up against the opener it wouldn’t pair properly.

Apartment techs came over to take a look and they decided to change out the entire garage door opener (current unit is from 2006 so it’s 11 years old), however procurement will take a while and I’ll be stuck having to use the wall switch (that still works) or the manual pull.

Decided to tear into the logic board to see what’s going on and if I can fix it. 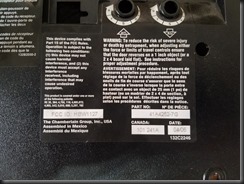 That’s the plastic back that holds the logic board, removal is easy (3 sets of wires for the wall switch and sensor) and 4 screws. Mine is a 41A4252-7G, I suppose quite a few different models of garage door openers from the same manufacturer will be similar. Disconnect one connector and it should be free to move to your workbence, a few more screws hold the main PCB to the plastic back. 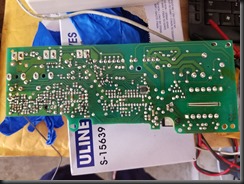 Board out, no broken joints like I’ve read on some other places.

Decided to remove the main filter capacitor on the input of the 5V regulator (I’ve read elsewhere where someone had a similar issue that injected noise into the RF section and killed reception). 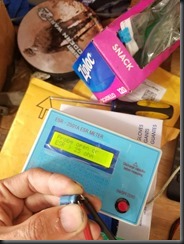 o.O. More than 25Ohms ESR? That’s definetly bad, my DMM had a capacitance measurement that indicated that it’s 220uF (it’s marked 330uF), doesnt seem that bad but ESR was indicative of a failed unit. 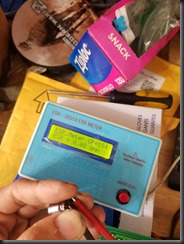 A trip to Tanner Electronics nearby got me 5 Nichicon 330uF 35V capacitors for $1.25. Their ESR measures 0Ohms. 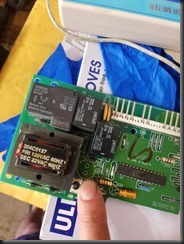 Here’s the location of the capacitor. 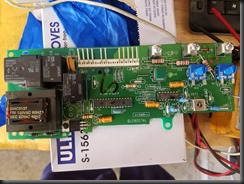 After soldering in the new capacitor and hooking it all back up. My garage door opener works good again. Yay!