Klipsch made some questionable choices with regards to the amount of gain and how they drive the headphone outputs. Mine had bad volume and sub control potentiometers so since I was gonna dive in and replace those, I might as well fix the hiss and headphone section.

Per the stock design, there's an insane 7.5 gain (just on the headphone section) regardless of where the volume control position is at, even with it off, which just makes the speakers hiss constantly (I can hear them at my sitting position) even with no / grounded inputs, I have never used the volume control past the 1/4 mark. 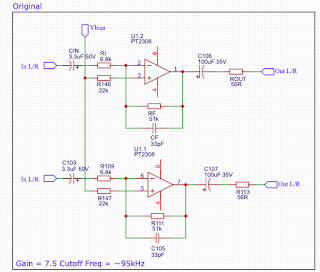 I've traced out just headphone section (bottom right of the control pod PCB), which is the biggest contributor to this hissing. No idea why they went with output resistors and 7.5x gain, with such a insane amount of output resistance the voltage driving the headphones just gets dissipated in them. I put in 1kHz sine wave and measured ~120mVp-p but only ~50mVp-p on the headphone side of the resistors.
Here's what I did to fix all that. In the course of messing with this I killed the PT2308 while probing around (opps), they're kinda hard to come by in a DIP package, so I was either gonna have to put one on a SMD converter board or put a different opamp in there. 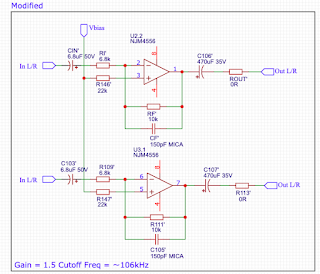 I went with a NJM4556 (which has more output current capability than the original), a gain of 1.5 (which was plenty loud on my headphones), removed and shorted out the 2 output resistors, increased the output capacitors to 470uF, upped the input capacitors to 6.8uF (probably overkill) and changed the feedback capacitor to 150pF (prevents HF from being amplified).
Even with the stock 33pF feedback capacitor, I didn't manage to get the opamp to oscillate. A good test is probably to stick a nice sharp square wave onto the input and see if it's gonna ring a bunch, I might do that if I experience issues.
With the changes in place. I can only hear a slight hiss if I place my ears right up to the speakers and only from the tweeter. I no longer have to only use the bottom 1/4 of the volume control and I get plenty of drive to my headphones. I'm happy, lol.