Most people will consider the Xenon (early Xbox 360s with no HDMI) a waste of time and not worthy of repair, however this unit had an early dashboard/kernel that could be JTAG’d, so saving it had some merit.
1st thing I did was to reball the original GPU, however upon attempting to remove the GPU, I pop-corned it (delaminated the GPU), even though I had already prebaked the entire board at 100deg for over 7hrs, wasn’t using a too fast ramp up and wasn’t too close, I ‘m putting it down as way more moisture in the BGA package then I anticipated (Xbox was dis-used for awhile and here the humidity is amongst the highest you’ll find in the world).
Pulled the GPU and bought a couple of spares, they arrived nicely in the tape+reel packaging and already pre-balled with leaded solder. 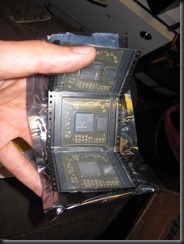 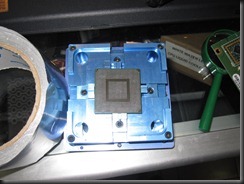 Prepped the board (wick and clean it out real well, then apply some flux), this time I’m trying a generic liquid flux that I got locally (mostly IPA with some rosin based flux in it). 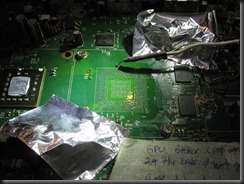 The soldering process went pretty uneventfully, here it is completed. The flux does leave behind some pretty heavy residue, might be because I used way too much. 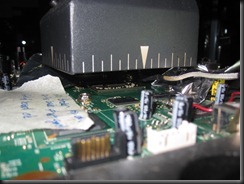 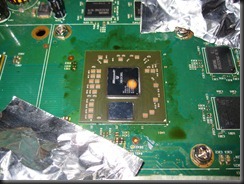 Cleaned off the residue with some IPA, and then tried to boot the box up. Expecting it to work 1st go, but no dice, it RROD’d again with a secondary error code of 0022. I was scratching my head for awhile, and then I tried reflowing the GPU again (thinking it never attached properly or something) but still 0022.
Careful visual check on the bottom side of the board though, I found this. 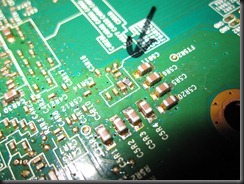 So apparently one component had moved and was creating some kinda short (I believe it’s a fuse or a 0 ohm link). Moved it back into place, and then again expecting the Xbox to work, no dice, 0102 error code now. 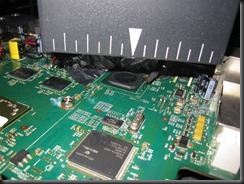 I reflowed the SB and rams around the GPU, but still no dice. Again careful inspection helped out, I noticed a very small air pocket starting to form on the top side of the GPU, must’ve happened during the 2nd reflow (I tried slightly higher temps). Ah well…
The next GPU I attached underwent a 2hrish bake @ 125 to try and get rid of moisture, and this time I used the fake Amtech flux (read my previous post for more info) to attach the GPU (I find it less messy due to the more controllable quantity, liquid flux is kinda hard to quantify). Tried booting it up after it’s cooled down (without moving the board too early this time, I think that was what made the component moved previously, although why only 1 moved it beyond me) aaaannnnndddd……. 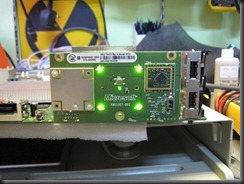 SUCCESS. I’ve yet to properly test it out over some time though. Will apply an X-clamp replacement 1st and then go on from there. That’s another update though. If you're interested in getting your Xbox fixed, or looked at, visit http://www.epicgear.com.sg/.
Posted by Goose at 1:18 AM