Had one of these land in my lap from my cousin, the unit would not power on. Hooking the adapter up to the unit will just cause the power LED next to the switch to just keep flashing red and no button inputs result in anything.
Tearing apart the unit was pretty simple. A stiff plastic card was used to carefully separate the back from the tablet. You wanna be careful doing this as the plastic is rather thin in some spots. 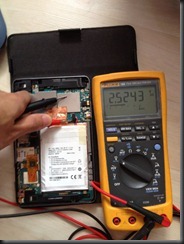 Viewsonic has helpfully left some voltage probe points right next to the battery connector for easy troubleshooting. In my case the battery read 2.5V, way under the nominal Lithium Ion/Polymer voltage of 3.7V. I suspect the unit might have been left to drain for a long time.
Hooking the charger/adapter to the tablet overnight didn’t charge the battery one bit, so I went hunting for a suitable replacement battery. 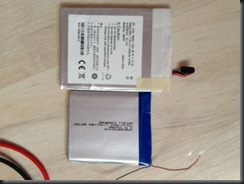 A shot of the new battery that I found locally (top's the old deadish battery). The original battery was 3250mAH. The new replacement was physically smaller in terms of width and length, but slightly thicker. I confirmed that it’ll fit in before purchasing it. The only drawback was that it had a capacity of 3000mAH, so I expect to have slightly less battery life compared to before. Oh well. The replacement battery costed me around USD$25. I’m sure with enough hunting around I might be able to find a better replacement, but for this price I think it can’t be beat.
The protection circuitry that resides on top of the old battery needed to be swapped over to the new cell, so I proceeded to cut the insulating tape and pull that off. 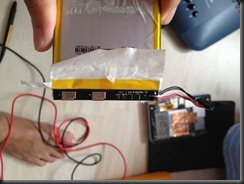 The new cell came with some circuitry as well, but since it won’t work with the Viewsonic tablet, it’ll have to go. 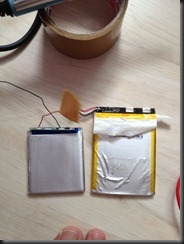 A picture of the protection PCB that’s going to be transplanted. 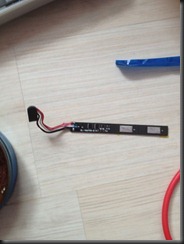 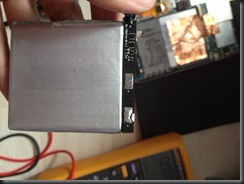 Here’s a picture with one of the battery tabs soldered to the PCB. The tabs on the new cell are in a different position from the old, so I had to solder one end and jumper the other to the right pad on the PCB. There’s the positive end that’s jumpered. I used 2 thin wires to try and increase the current carrying capability without compromising on the battery’s thickness too much. 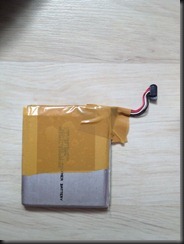 Battery’s finally all done up and taped together. I just used some packing tape. 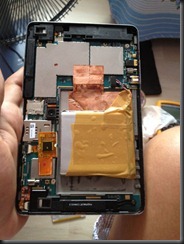 Installed and lying sideways inside the provisioned battery space. At this point even though the cell measured 3.8V, I didn’t measure the same voltage on the tablet’s test point. I tried plugging in the adapter and powering on the unit, lo and behold the screen came up and the test points measured 3.8V. I‘m guessing the electronics on the protection PCB can actually stop current from reaching the tablet (shutoff the battery totally) to prevent draining the battery too deep when it’s flat. 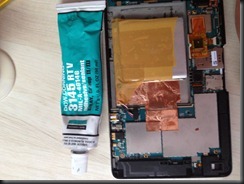 After confirming it works. I applied a little Dow Corning 3145 to the underside of the battery to secure it to the tablet. Wouldn’t want it shaking around inside. 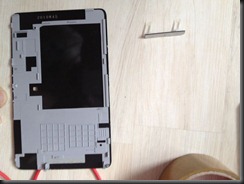 Not forgetting the SIM+MicroSD protective cover, I re-assembled the tablet. 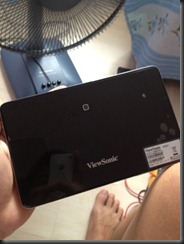 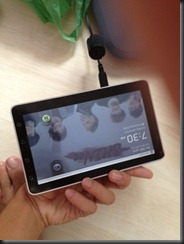 Uhhh, not too sure what kinda wallpaper that is, but it works. 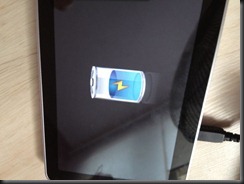