Been awhile since I last posted, pretty busy with real life recently. Don’t worry though, I will keep updating my blog from time to time.
Got this about a year back during a friend’s housewarming to fix, and yeah I basically forgot all about it until recently when I was clearing out my storage rack. 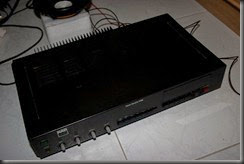 Initial power up, the amp section seems to be okay (at least it doesn’t have any serious offset that might blow up a speaker if I connected one up. Aux and Phono inputs seem to be okay as well, so I hooked up a test speaker.
The FM/AM tuner sections were stuck at 0.00 on the display and would only move by 1 step (50Khz on FM) and go back to 0.00 when I released the UP/DOWN buttons. So I disassembled the receiver to try and fix that. 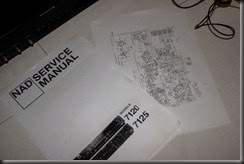 I managed to get a service manual off the internet, it had the complete schematics plus tuner alignment instructions. Google “NAD 7125 service manual”. 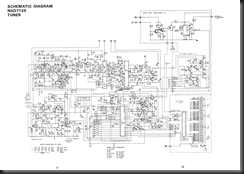 Initially I thought maybe the main IC controlling the tuner section was wonky somehow, so I set out to measure some voltages. Voltage checks on the ‘G’ ribbon (that carries power to the tuner section all checked out good.
Voltage check on IC6 (TC9137P) was ok as well.
Wires to the LED display were also verified to be good.
Output of a 5V regulator (78M05) IC7 was also good.
I managed to get the tuner to somehow work when I cut 2 cable ties holding the LED wires together as well as remove the LED display bezel to see if there was anything wrong there.
I thought somehow maybe the paper washers holding the LED display bezel had become conductive and impeded correct operation, but I was really not confident I had fixed the problem.
I went ahead and programmed a few of my favorite radio stations into the channel buttons and powered it up every day to see if the issue would recur.
The fault re-appeared 3 days later, but the difference was this time it was not 0.00, but rather the station that I had programmed into channel 1.
This of course makes sense now, the tuner hadn’t been powered on for a pretty long time and had lost all it’s internal memory, so the stored frequency in every channel was 0.00Mhz and it was trying to switch itself to 1 all the time even when I was tuning it manually with the rocker. The pushbutton switch on channel 1 was basically conducting sufficiently to cause the main tuner IC to sense it as permanently depressed.
I sprayed a little Electron 22 into the switch and exercised it a couple of times and tuner function was restored. 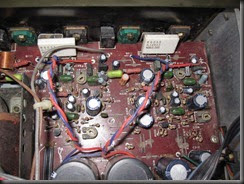 At this time I went ahead and tweaked the amplifier’s center voltages and idle current to 0.00V +/-30mV and 30mA. Before tweaking it was running a very low idle current (2mA), not sure if it drifted or someone was inside here previously with a ‘golden screwdriver’. 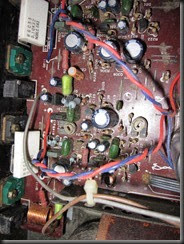 There are 2 potentiometers per channel on the amp that control the offset (center) voltage and the idle current. To do this you’d have to 1st zero out the output as best as you can (without any signal input of course, I do it by shorting out the AUX jacks, turning volume down to minimum and switching the input to AUX). 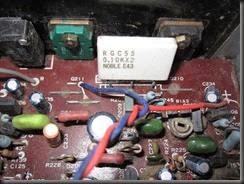 The emitter resistors are what you’d need to measure to determine the idle current.
V=IR
I = 30mA and R = 0.1Ohms
V=(0.03)x(0.1)
V=3mV
So to get a 30mA idle current you’d need to adjust the pot till you get 3mV across 1 leg, each emitter resistor in this case is actually a combination of 2 in one package, with the center lead common (to the output). Check both sides after you’ve adjusted to make sure they are close.
After adjusting it in, leave the set for awhile and come back to re-confirm it’s still stable on both sides of the emitter resistor just in case it drifts.
I also spent some time dusting the interior, in fact the pictures taken above are after I’ve removed most of the dust. 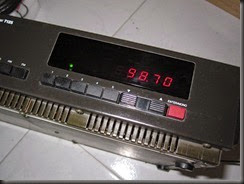 After listening to the receiver for abit I noticed yet another issue, the Stereo LED only lighted up very rarely and attaching a longer antenna plus shifting the unit outdoors (I was testing it in a semi electrically noisy environment, near PCs and stuff) didn’t help.
Measuring the MPX VCO output with my DMM that had a frequency counter option showed it running at 78kHz, which was out of limits, should be smack on 76Khz (+/- 10Hz). 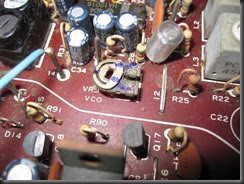 I don’t own a RF generator to test and align the tuner in accordance to the steps outlined in the service manual. So I used an alternative method to get it in.
I marked the VCO potentiometer in 3 places (it’s one of the those crappy wobbly ones that can shift around as you’re turning it, so it’s gonna be hard to get it exactly spot on if you only marked it in one spot) to enable me to return it to the original point if this adjustment didn’t help.
Then I tuned to a strong station mid-band (in this case I used 98.70FM).
Pot was then turned fully CCW (counter clockwise) and slowly turned CW to just where Stereo LED indicator came on, this is position A.
Pot was then turned fully CW and slowly turned CCW to just where the Stereo LED lit, position B is here. 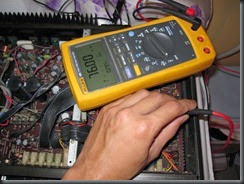 Finally I set the pot to between position A and B, measuring the VCO at this point yielded a stable 76Khz. Listening with a pair of headphones confirmed the tuner was in stereo (there was audio separation), switching to mono turns the Stereo LED off and results in no separation. 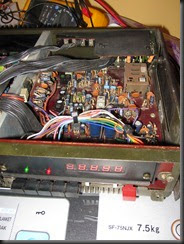 I then tested other stations across the band (88-108Mhz) and found that they went into stereo reliably. 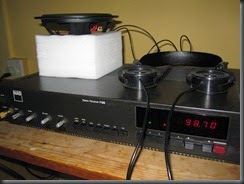 After I was satisfied with the results I replaced the cover and touched up some paintwork on the front panel that was scratched. I still need to go out and get some replacement knobs though, but at this point I’m really happy with the results.

On a lighter note. Merry Xmas everyone!
Posted by Goose at 8:24 PM