Had an Auzentech X Meridian 7.1 as my main PC’s sound card for quite awhile (since like 2007 I believe, when they first came out), it has been working flawlessly (even after I moved from WinXP to Vista and then now Windows 7).
One day I was listening to music and the sound suddenly just dropped out on the front left and front right channels(I only use the front channels of the card), just before it went there was a very slight pop, a very subtle one.
Initially I was thinking maybe it’d be a driver issue, Auzentech has since folded, so the only real copy I got was from http://www.touslesdrivers.com/index.php?v_page=23&v_code=32167
Reinstalling the driver didn’t fix my problem though, a few hours later and the issue was back, audio will just suddenly drop out without warning. 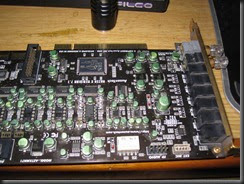 I pulled the card and did some quick visual inspection. Didn’t actually see anything really wrong. So I cleaned it up and re-installed the card, puzzled.
The next time the audio went, I could actually just about hear some audio still going, turning up the volume in Windows confirmed there was actually some audio coming through, which told me the DACs and main IC on the sound card was probably working right, but something was causing the audio level to drop drastically. 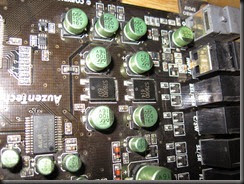 Initially I suspected maybe the +/- supplies to the output opamps were somehow cutting out. +/- supplies are derived from the PCI +/-12V going through a 7808 and 7908 regulator. 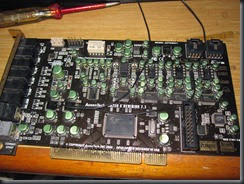 The sound card is actually flipped over when installed in my PC, so there was no real way I could measure the outputs when the card was operating, so I opted to put in 2 wires to let me monitor the regulator outputs, I was especially interested in what was happening when the audio disappeared. 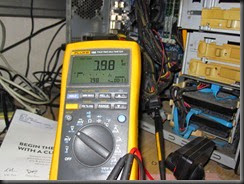 Adding these set of wires somehow made the sound card actually work for about 1/2 a day before crapping out. LOL. However the volatage stayed stable even when the problem occurred. So it’s something else.
Before I shutdown the PC to pull out the card, I ran my fingers over the entire area of the sound card and realized the output muting transistors for the Front Left and Front Right channels were getting extremely warm, I didn’t think they were supposed to get so burning hot (it was warm enough that I couldn’t put my finger on it for more than 2 secs). 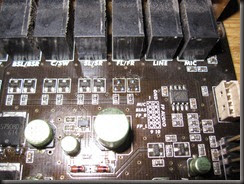 I pulled the card and desoldered the monitoring wires, at the same time I tested the muting transistors with my multimeter, for some reason they measured okay on the diode range, I guess the fault is intermittent somehow.
After de-soldering the muting transistors I’m happy to report that the card is working okay. I’ll update if anything changes.
The muting transistors actually shunt the output to ground when the processor demands output muting (especially during mode changes). I can now hear a pop every time I change the output (changing it from say 96kHz to 44.1kHz), I don’t change that very often so I guess I’ll leave the muting transistors out. The original transistors are marked MAX33 (SOT23 package) which I have no idea refer to which actual part, I guess finding a suitable mute capable transistor and substituting that in shouldn’t be too big of a problem.
Posted by Goose at 11:50 PM